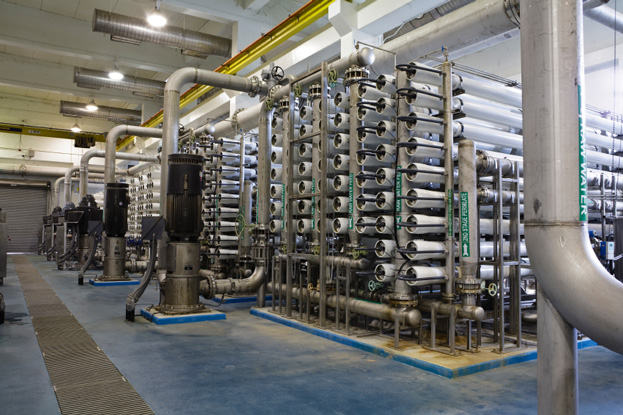 Wastewater Treatment
The equipment in wastewater treatment plants is exposed to aggressive and corrosive substances. Stainless steel plate and plate products find extensive use in these applications because of their corrosion resistance combined with their durability and minimal maintenance.

For above-water-level service, 304L/304 is used extensively. For piping systems that move the wastewater and for service underwater, 316L/316 is preferred. Duplex alloys LDX-2101® and 2205 are finding increased utilization, replacing 304L/304 and 316L/316 respectively, due to their superior corrosion resistance and higher strength levels that facilitate the design of thinner gauges, saving weight and cost.

Desalination
There are three major desalination processes that have been developed to remove salt from seawater. The first large-scale process was the Multi-Stage Flash, where boiling water is evaporated and then condensed in a series of flash chambers. A later process development for the avoidance of scaling is the distillation process – Low Temperature Multi-Effect Distillation. The newest and fastest-growing process is that of Reverse Osmosis, where fresh water is achieved by a type of filtering.

The Multi-Stage Flash process has used 316L/316 stainless steel for the evaporators but is encountering problems with pitting and crevice corrosion. Duplex 2005 is replacing 316L/316 in this application. Another problem area is where the feed is entering the brine heater. Superaustenitic SSC-6MO or Super Duplex 2507 can be utilized in the first flash chambers, with 2205 for downstream applications. Another area of concern in MSF plants is the vent system. Here, SSC-6MO is finding usage.

In the Low Temperature Multi-Effect Distillation process, 316L/316 has been used for the evaporators; however, SSC-6MO has also been specified. Duplex grades 2205 and 2507 are also being considered for the large cylinder applications.

Reverse Osmosis is the fastest growing desalination process. 316L/316 was used in the first plants built, but it suffered extensive crevice corrosion. Subsequent efforts to address this problem with 317L/317, 2205, and 904L all failed. SSC-6MO and 2507 are being used successfully today to address these issues.